Making a Spectacle of Yourself: Engaging Corporate Training 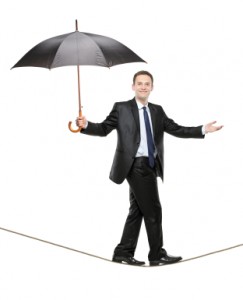 My daughter and her friends enjoy making those annoying YouTube-style videos that feature improvisations, movie parodies, and music videos. I hate them—not my daughter (or even her friends) but the results of their creativity. I sometimes try to intervene. This is fruitless but I can’t help myself. I tell them about Aristotle’s Poetics and his recipe for good drama—plot, character, thought, diction, melody, and spectacle. They have never heard of Aristotle. I tell them that the biggest problem with their productions is that they consist almost entirely of spectacle with very little character, thought, or diction. They laugh themselves silly and roll on the floor. I ask them if they know what spectacle means.

Last week, I took some vacation time and went down to the Utah Shakespeare Festival in Cedar City. I’ve been going to the festival for twenty years, and I absolutely love it. There have been good and not-so-good years. This year was extraordinary, although I did lament the ironic shortage of actual Shakespeare performances. In recent years, the festival has been pandering a little more to their audience, replacing one of the Shakespeare plays in their annual repertoire with a popular musical. This year, it was Les Mis. What is the appeal of Les Mis for a contemporary audience? For one, it employs spectacle very successfully.

One afternoon, I was sitting on the grass watching the festival’s green show (a sort of pre-show warm-up before the evening performance). Much to my daughter’s amusement, a troupe of rustic, faux-Romani singers and dancers were catapulting plush sheep into the audience. I spent a very few minutes musing over spectacle as an element of performance and the ways in which theatrical performance may or may not be related to workplace performance. We certainly don’t aim to train an audience of pretenders, and we only rarely acknowledge the importance of entertaining learners in corporate training. That said, it occurred to me (once again) that what may be lacking in our attempts to elicit a winning performance might be the very element that is overdeveloped in my daughter’s film projects.

How do we justify spectacle? We usually say that we’re striving to capture the attention of our learners, (many times this method is used in web based training) which is important, but I don’t think that’s all that we’re doing. Take motion graphics, for instance. Why use motion graphics rather than still images? In Robert Ward’s last posting, he characterizes this eBay example as engaging. Why? Well, it isn’t my daughter’s cover of “Call Me Maybe” but I think it does use spectacle to good effect. Here’s a breakdown of so-called gratuitous aspects of the design with my own assessment of the instructional value: 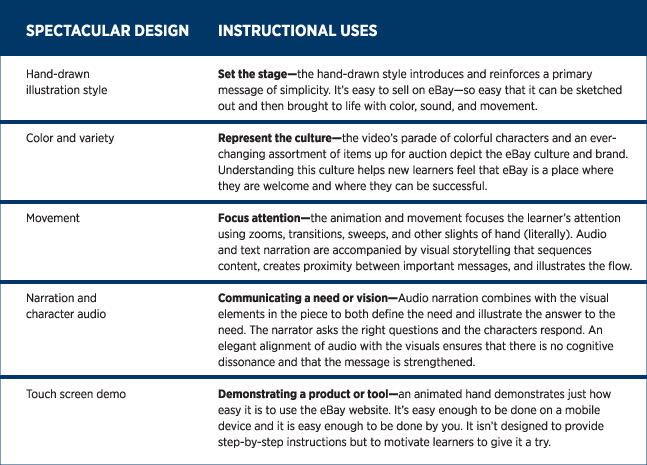 So, is the eBay tutorial a self-contained wonder that comprises everything we’d ever wish to include? Of course not. Is it refreshingly different from the page-, frame-, and slide-based web based training formats that our industry has overused? I believe it is.