I’ve been involved with an ongoing project for over a year now, and I’m currently converting three web based training, elearning courses to instructor led training courses. The courses deal mostly with soft skills and sales processes; the content was based on learner and SME input from a Needs Analysis that was conducted last year. Learners can choose to participate in either classroom or web-based settings—or both. We created all three web-based courses first, and we are now building the ILT courses. As with all transformations from the web to the classroom, activities and explanations change—sometimes drastically.

In the web-based training courses, we built comprehensive Flash interactive scenarios. As we started to convert the web-based, we wanted to do something with the pieces we created. Our first thought was simply to stream the activity through a PowerPoint and allow learners to vote at the decision points.  This learning wouldn’t be as effective as we felt it could be though.

So, we went back to the drawing table and decided to create a game of some kind. Although we already had all the content, the process of making a board game was much more intense than expected. This partly stemmed from trying to adapt existing content to a cohesive game style. Here is a snapshot of the process.

In the original web-based activity, learners would decide what to ask the customer; they would hear the response; then they would receive feedback. 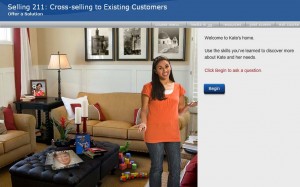 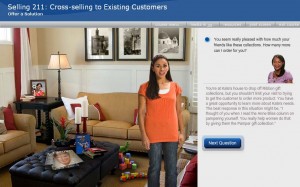 Our first concept of the game included cards that represented each decision point. When we tested it out in the office, it was too confusing.

Here is the original card concept. 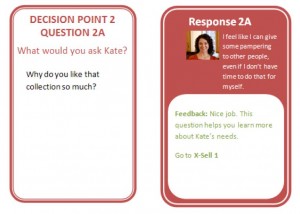 After the initial test, we changed the concept a bit. We thought this board would feel more like a game. We were still using Word for the drafting process, and we hadn’t consulted an artist yet—which is pretty obvious. 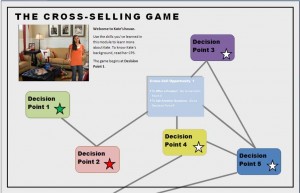 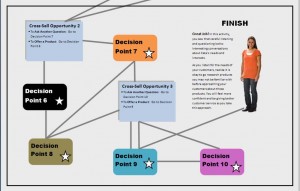 Since the cards wouldn’t be placed on the board, the cards became larger: one for each decision point. We thought this would simplify the process. 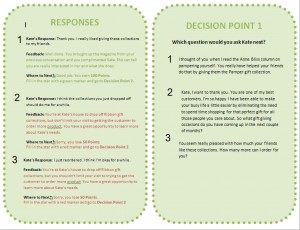 Here is a shot of all the decision points on one board. 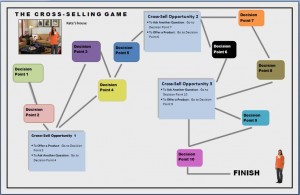 At this point, we took what we had to our client. After discussing and re-evaluating how this would be used in the training, we decided that including so many pieces wouldn’t be beneficial for learners or for production purposes.  So, we put all the decision points in the Participant Guide and designed the gameboard to be part of the guide as well. This also allowed for learners to re-create the game after the training.

He gave us two versions. We were first thinking of a Candy Land type of layout: 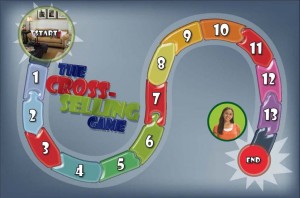 Our client also liked the idea of having more of circular board, maybe something like Trivial Pursuit.

You’ll also notice the scoreboard that shows up in this version. We mocked that up first in Word. Here is the first iteration: 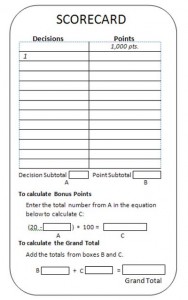 Our graphic designer made it look much better: 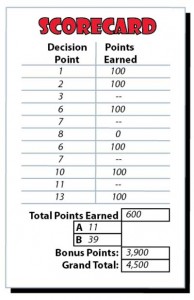 After consulting with our client, we finally came up with a product that worked for the intended learners.

Here is the final gameboard: The first reviews from the client have been very positive. Their test groups enjoyed the concept. We also included the Flash activity as an executable in the PPT, in case they would like to run it with a class.

Converting this web-based activity to an ILT interactive piece has been very rewarding. It was fun to create and fun to test. This was only one activity in one of three web based, elearning courses. We’re currently creating games for the others. I’ll be sure to share when those are finished.

Learn more about our blended learning solutions and custom training.