Gaining Insight into Adult Learning by Traveling to Uncommon Destinations 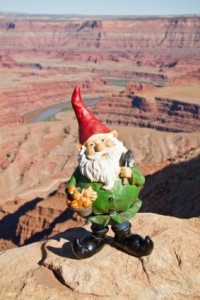 A common tension in corporate training is the desire to allow adults to learn the way they most like to—self-directed—with the need for employees to know very specific facts, sometimes legal compliance hanging in the balance.

How this tension can be alleviated is a constant question in the minds of instructional designers—at least in the mind of this instructional designer. I want to provide learners with a rich, interesting, creative learning process, and I think anyone involved in training would in theory like to do the same. But we are constrained. We have budgets. We have deadlines. We have legal compliance that says every employee must see every word of a given course even if they’ve read it all before.

But adults like to be self-directed, and they are more likely to learn and internalize knowledge if they are allowed to explore and choose. That’s the paradox of “required” knowledge; the way it’s presented often guarantees that it will not become true applicable knowledge.

I recently started a personal project that has given me some unexpected insight into the nature of self-directed learning within constraints.
In 2010 I moved back to my hometown of Salt Lake City, Utah, after nearly a decade away. I left soon after I reached adulthood, so I’d never really gotten a chance to explore my home state on my own as a grownup.

I have long been in love with the random, and a few months ago I stumbled onto my dream website: DartOnMap.net. The site consists of a map of the world and a button you click that “throws” a dart, which lands in a random location. The site allows you to choose a custom area; this is the feature on the site that really pulled me in. I drew a box around Utah and determined that I would let the dart dictate where I would spend one weekend a month throughout 2012.

Dart 1. The first time, the dart landed at Joe’s Valley Reservoir in Central Utah. My sister-in-law and I hopped in her truck and made a day trip of it. On the way there, we stumbled upon the Central Utah Art Center (CUAC—like the duck) and looked at some great contemporary art. We tried to make it to Joe’s Valley on a mountain road that turned out to be closed because it was February. We consulted the map and saw that we could backtrack a bit and go around the mountain instead. We got there…a little later than we anticipated but much more knowledgeable about contemporary Utah art and which roads are passable in February and which are not.

Dart 2. The next dart landed near some potash ponds near Moab, Utah. I had never heard of potash before, so I did some background research to find out what I’d be looking at. I learned even more when I read a plaque overlooking them (fun fact: the word ‘potassium’ is a latinization of ‘potash.’)

Since we were in the area, my traveling companions and I spent some time exploring the Moab area. A friend learned from a local about a good early morning hike. We got lost and didn’t make it to that hike, but we found another and stumbled upon some petroglyphs. When I got home, I looked them up online and read an explanation of some of the more cryptic figures (that bear scaring away the monster turned out to be a woman giving birth).

Dart 3. Upon arriving home from Moab, I threw the dart again. It landed in the middle of nowhere in Duchesne County. This was the first time the dart hadn’t landed near a fairly obvious feature on the map. I was nevertheless determined to make a weekend trip of a place that seemed to be empty. I was forced to dig around a lot, but I came up with something wonderful: a llama ranch. I went with my mother, two nieces, and nephew and we learned how to feed llamas and lead them to pasture. My nieces and nephew still firmly remember some very important facts: llamas are usually 300 to 400 pounds (so don’t let them step on you!), and, unless they’ve been abused llamas won’t spit on you—just on other llamas. 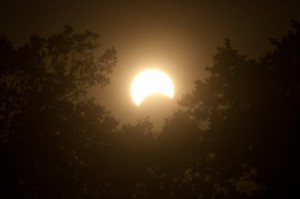 Dart 4. The next dart landed in the middle of nowhere again: fifty miles west of Cedar City, Utah. The closest town was Modena, Utah, which is nearly a ghost town (we found out later that 13 people still live there). A couple of weeks before the trip, my 17-year-old nephew informed me that there was going to be an annular eclipse in Southern Utah. I did a little more research and found that the dart had landed right smack on the center line of the eclipse. My little dart trip project ballooned: everyone wanted to come, even the people who thought I was really weird for letting a dart dictate my weekend plans. We had a fabulous wide-ranging weekend. We visited the dart and Modena, we saw an amazing eclipse (and listened to Johnny Cash singing ‘Ring of Fire’ at the apex), hiked in St. George, swam in Sand Hollow, camped among jackrabbits, and none of us will ever forget it.

My unexpected insight about corporate learning came as I realized that my dart trips were circumscribed by two immovable constraints: a short amount of time and a very specific latitude and longitude. But within these constraints I have packed an enormous amount of discovery that I feel ownership over. I always try to visit the exact dart landing spot, but I also make sure to exercise my freedom to find what in the area interests me (i.e., llamas), and I inevitably find out things I never knew about before (i.e., potash).

This is still a nascent line of thinking for me. I am still thinking about how something like this would work in a corporate setting. I just know that the unexpected and delightful things I’ve done on these trips have increased my creativity, my thirst for more knowledge, and my tolerance for letting things happen rather than trying to control them. There’s gotta be something here.

What leisure activities will you participate in that will offer insight into the world of corporate training?