Whether you’re a beginning instructional designer or a seasoned veteran in the business, you are most likely familiar with the term “scope creep.”  Like most of us, you have probably even been guilty of allowing scope creep to enter a project—to some degree.  Christopher Butler says the following about scope creep: “It is the kind of thing that accumulates so slowly and subtly that you don’t realize it’s happening until it’s too late, like when you’ve already promised it or, worse, when you’re already building it.” Scope creep is dangerous because it upsets the balance of the project management triangle. 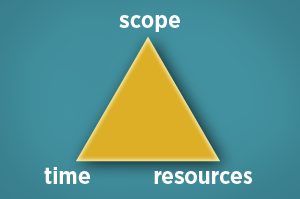 3) Be able to let go of the project.  You have to be able to let go of the project after you’ve designed it.  It’s easy to justify making some “final tweaks” to the project after seeing it being developed, but this leads to scope creep.  A former project manager of mine would meet with the team at the end of the design phase of a project, and we would go over the project to make sure everyone was ready to “let go” of the design and move the project into the development phase.  This collaborative transition was very helpful for me as the instructional designer.

We welcome your comments and feedback.  How have you been able to minimalize or eliminate scope creep from your projects?