Taking Yourself Less Seriously in the Corporate Training Industry 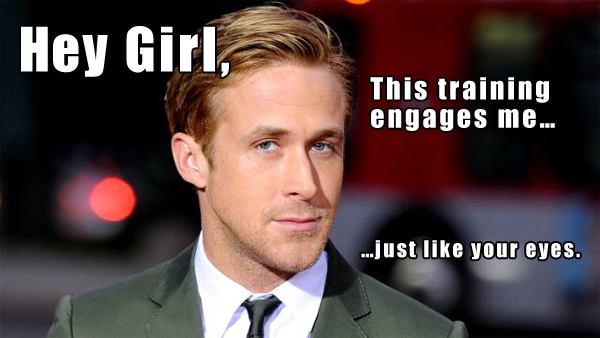 I’ve decided that laughter is my secret workplace weapon. I truly believe it cures most ills:

One, I’ve found that in uncomfortable situations, beating someone to the punch with a self-deprecating joke can work magic, especially when I suspect the very thing I’m joking about is something that’s a source of annoyance. It’s just so much less awkward than my getting defensive, and it’s much more smiley. Even the most difficult people usually prefer smiley-ness.

Two, humor can take the sting out of criticism or correction when it’s done good-naturedly—for instance, if you had, hypothetically, a client who doesn’t want to point out that you forgot to include a conference call number on your meeting invitation, but must do so in order to get on the call, the situation could be embarrassing, no? Actually, no! One client’s masterful comment (which ended up resolving just such an issue) was that she had always wanted to try a telepathic conference call. Issue resolved, minimum cringing on my (hypothetical) part.

Humor has to bubble up organically from the primordial soup of experience and conversation, however. Nobody wants Jerry Seinfeld running their status call or making a request for some graphic art assets. There are times when I sense that coworkers find my constant stream of rollicking amusement tiresome (or even, dare I say, obnoxious?), and that’s when it’s time to put the mic down and approach the problem in a manner more comfortable for one’s listener.

I work with people whose job it is to look at an organization (corporate training), coax out a vision of its culture, and discover which strategies will be more or less effective with the learners being instructed. One side effect of cultivating this skill is that these individuals do the same thing with me and our other coworkers, and because humor resonates so strongly with us, hilarity ensues. Frequently. This is not to say that it’s all clown cars and banana peels every day because we of course take our clients and our work very seriously. Sometimes, however, we try and take ourselves a little less seriously, and I find that creativity usually expands to fill the space that ego and bluster might have been taking up.