The Value of Online Discussion in Custom Training Design

I teach a senior seminar once a year up at the U. A few weeks ago, the associate director for the department in which I teach attended the class with a few guests, just to observe. We talked for a few minutes after class, and I’ve thought quite a bit about what she had to say. I was struck not by her feedback on my performance as an instructor but by what she had to say about my students. She was impressed at how conversant the students had become in the theory. For many of the students, this was their first exposure to some rather complex psychoanalytic and post-structural theorists, and yet they were able to meaningfully apply what they were learning and demonstrate that knowledge in dialogue with other students. Of course, I was pleased that the students were doing so well, but I hadn’t stopped to think about why. I hadn’t made many changes in my syllabus from the year before, and what I was doing in the classroom was basically the same. One of the changes, however, and one that I think may be directly linked to the students’ improved facility in discussing and applying theory was the use of the discussion feature in Blackboard. This year, I replaced one of their formal papers with a requirement to contribute at least four meaningful postings to the online forum. As the term began, the postings were a little tentative as students built up confidence. Most of the students were starting new threads with each posting rather than responding to other student’s threads. I found that I had to respond to a few postings or the students would be getting no response whatsoever. By the second or third week, however, this changed dramatically as students selected topics for their term projects and began to use the forum to test out their ideas with other students working on similar topics. Soon, there were as many responses as there were new threads. I deliberately refrained from participating to encourage more peer-to-peer commentary, but I read all of their postings in detail. Often the online discussion would transfer over into a live discussion in the classroom. Here are some things I would recommend in order to successfully include online discussions in learning design:

What the forum did was to give them a safe place to practice, without concern for their grade, and without the more public focus that they would get in class. I think it also helped to prepare them for class, to prepare them for their formal writing assignments, etc. I’m quite proud of them. Here’s a snapshot of some of the threads that they started. 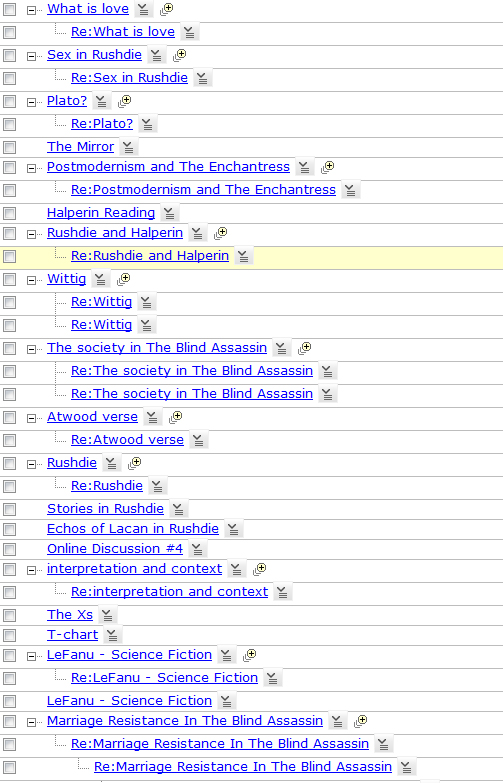