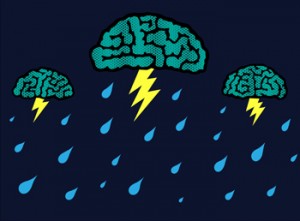 I’ve often asked myself why we (the Allen team) sometimes have some of our best, most creative ideas while we’re working on a pre-sales mockup or demo and why that creativity sometimes outshines the work the work that we do later as part of the project. I think that there are several reasons, not the least of which is that it is sometimes easier to be more creative when there are fewer constraints. Often, in the pre-sales process, we don’t yet know what those constraints will be. They may be technical, legal, or specific to the quirks of certain stakeholders. Sometimes having less information can be a good thing, at least as a starting point. This past week, I got to be involved in two very different types of creative instructional design meetings. One of them was a brainstorming meeting for a project in pre-sales, where we needed activity ideas for a course in pet health and nutrition. The other was for a project that we had just won, but it had a very ambiguous scope. We needed to design an online reference tool to help users of a system that tracks data from drug trials. I think that we came up with some good ideas for both projects (and I’ll talk about those later on). I thought I would write up my very own pointers on getting the most out of meetings where you need on-demand creativity:

I’m sure that’s more than enough advice on training consulting and brainstorming. For every rule, there is an exception anyway (usually several exceptions). How did our brainstorming meetings turn out? Well, for the pet nutrition course, we came up with a couple of activities. One activity teaches anatomy by playing off of DaVinci’s sketch of the Vitruvian Man, wherein the learner contrasts the Vitruvian Man with a Vitruvian dachshund and a Vitruvian housecat. Another is a kitty weight loss challenge, sort of a Biggest Loser: Cats. For the online systems reference, we came up with a design that allows learners to search for exactly the information they need, tag that information so that they can easier find it later, and see the collective tags of their peers and coworkers. They can navigate by role, by step in the system process, or search by their tags. Arguably, this is not as fun as spoofing feline weight loss. On the other hand, it is very different from how we had envisioned the solution originally and much more usable by learners.